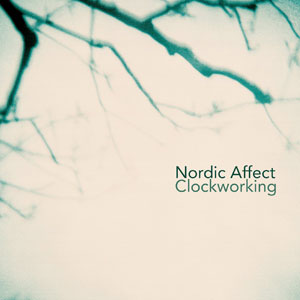 The hypnotic title track ‘Clockworking’ is a thing of pulsing beauty, and somehow reminded me of both Godspeed You! Black Emperor’s F#a#infinity and Gustavo Santaolla’s devastating soundtrack for 21 Grams.

The unfolding of deep currents and music box tick-tock in ‘Clockworking’ is deeply affecting, and when I close my eyes, can be completely carried away. Sonorous and cyclical slowly beat around each other to extraordinary effect, a kind of call and response between machine and music.

This sense of dislocation most returns in the closing track, ‘Sleeping Pendulum’ which has a sort of haunted Hardanger fragility that is intensely evocative. This is music to keen to in many ways, like the work of Benedicte Maurseth, which has a heartbreaking sense of something very ancient wired in to the passages of music. The music breathes.

I was surprised to join dots when I discovered that the composer of these two pieces is María Huld Markan Sigfúsdóttir and that I had been aware of her music before – she is a member of Amiina, who have collarorated with Sigur Ros, Spiritualised and many more. I came across Amiina on their brilliant 2005 Anumamina EP and am sorry to say lost touch with them since. 10 years, good grief, where did that go.

I’m also fond of the supernatural ‘2 Circles’, composed by Hildur Guðnadóttir, which has an eerie wonder about it as the singing voice sways in and out and with the violin in an out-to-sea wistfulness that is totally mesmerising. For some reason, something about it reminds me of Schoenberg’s 2nd String Quartet, that moment when the soprano comes in, and sings,

I feel air from another planet.
I faintly through the darkness see faces
Friendly even now, turning toward me.

‘Beacon to Beacon’, “a conversation between two lighthouses” begins with the waves on the rocks, and in a spikey manner that similarly recalls Schoenberg or Webern, is an intense experiment in rendering weather and natural forces into music. In the end, the music returns once more to the waves.

Clockworking is exceptional, particularly when I walk down by the sea and listen on headphones, where the kinship between these oustanding musicians and composers and the natural world seems particularly heightened. It is often overused to say that music has an otherworldy quality, but this music very much does.