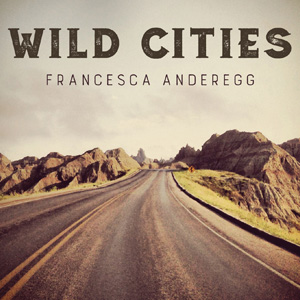 Well, what a space in time.

After my trip to the outer edges of the outer edges with Christopher Rouse last week, things don’t get back to normal just yet. I was half expecting to write about the familiarity of Puccini, perhaps. Or a nice bit of Bach. But normal service has not been resumed. Violinist Francesca Anderegg’s wonderful Wild Cities makes sure the trip back home is postponed.

What a fabulous record this is. I’m not a musician – as will be obvious to anyone reading this blog – but even non musicians can tell when there’s a blazing fire to be put out, and Anderegg’s playing is just such a fire.

What a spellbinding, twisting, intoxicating 49 minutes of incendiary violin this is. There’s a sort of perilousness about it, an edginess that I find quite extraordinary. She would be more than enough on her lonesome, but on this great album you also have to factor in Brent Funderburk’s piano as well, which is exceptional. In Wild Cities  two musicians basically bring their top game to a record and it’s a total joy.

Taking as its inspiration the music of John Adams, and sharing the call of Ginsberg (“Where O America are you going in your glorious Automobile … ?”) Anderegg chooses music from five young American composers who share a passion for the evocative space of Adams, and in whose work, she says, there are “imaginary landscapes of the future.” Minimalism goes on the road, in 21st Century vehicles.  What to me still seems the very essence of modern is being picked up here by a whole new generation. Who knows, as Sandy Denny put it, where the time goes …

Sometimes themed records don’t work, but this one does. There isn’t a single piece on it that I didn’t like.

The car door slams and we set off with the exhilarating ‘Remix’ by Ryan Francis. It’s a glorious, tumbling and rotating motor of a piece – key turned and we’re good to go. Adams is there in the piano and violin sing-song, and Glass, but when it kicks in with some glorious full throttle Americana, even Copland, I think. We’re off into a new kind of Appalachian Spring, with piano running up the highway as the violin shifts gear, looks out the window, soars above like a bird.  Swoops like a drone camera. The jazzy, bluesiness of the piano in places keeps the motor running – sometimes reminding me of David Shire from The Conversation soundtrack, sometimes even the hip strolling of Peanuts. Well, for me anyway! What I’m trying to say is that it’s just a bit of a road movie this piece, a travelogue. Where are we going? Who knows, but we’ll be there by nightfall. Or we’ll run out of fuel, abrupt, in a hot desert of dreams.

Clint Needham’s two ‘On The Road’ pieces are superb. Again, the playing is magnificent as we work out a place of timelessness between part one, ‘Nothing Behind Me’ and part two, ‘Everything ahead of me’. As with ‘Remix’ there is an enormous sense of progress and panorama, the emotional ups and downs of travel to who knows where. Sort of like the wild giddiness of driving down from a mountain in the early dawn, then a spiky catch-up with memory or regret as we’re lost in thought, gazing out the window at a world gone slow motion. Maybe at a gas station. In the rain. In the second piece we regain momentum, tumbling as if in a chase. Damn me if I’m giving up now, sort of thing. But of course, it isn’t that simple. The piano slows again in places and the violin flows over all this observation with a kind of Vaughan Williams wistfulness … until that relentless rhythm picks up, and we’re gone again. With a great thump of piano we have arrived at wherever we are. Wherever that is.

Ted Hearne’s composition ‘Nobody’s’ is excellent. It’s a take on Appalachian fiddle music and the clogging tradition, with electronic effects and a rhythmic thumping that creates a kind of elemental noise that reminds me of some Hardanger work like the wonderful Benedicte Maurseth – which of course makes lots of sense. Elemental is a good word. Music like this stresses for me that as long as the instrument has been played there have been such fierce tunes to dance and trance to – whether in the Appalachian mountains, or Norwegian fjords or the forests and clearings of Bartók. Some will find the thumping and squeaking and panicking of the fiddle to be harsh and wild, but I find it totally mesmerising. It bangs and bows to an exhilarating finish, and is both frightening and gorgeous at the same time.

The four pieces which close the record, by Reinaldo Moya, are utterly brilliant. They are ‘Imagined Archipelagos’ and the subtitles suggest their mental cartography: ‘The Island of the Imaginary Birds’, for example, or  ‘The Island with the Imaginary Moons’. Again, the piano and violin work supremely well together and as the pieces unspool there is a hugely exciting blend of the minimalist Adams expression, with the Venezualan folk music that inspires Moya – music that wends and dances, sways, forgets and remembers. This is best seen in the final piece (the ‘Imaginary Birds’) which carries both the relentless spooling of the industrial minimalist rush, and the stomp and sinew of a flamenco in blistering white dust. The piano is particularly wonderful here.

Don’t get me wrong, I love this whole record – but I’ve been sleeving a favourite till last: ‘Adjoining’ by Hannah Lash. If you were to lock John Adams, Alban Berg and maybe even Bernard Herrman in a room at midnight and trap them there till they produced music, it might end up sounding a wee bit like ‘Adjoining’. It’s an eerie and tense yet romantic nine and a half minutes that I really, really like. I mention Berg because there’s that fracture and stumble, but in places ‘Adjoining’ also puts me in that slightly heartbroken fugue I get from more ruminative Debussy piano pieces, say. Strangely it also recalls for me Wojciech Kilar’s Mina themes from Bram Stoker’s Dracula. Anyway, two ‘musics’ are at work. The violin reaches high peaks of something like desolation, perhaps, or a harsh longing or concern as the piece moves towards its close. You feel like you can reach out and touch it the emotion is so thick – but of course, in the end, you can’t. It’s not in this room.

What is adjoining here, you wonder at the end of Lash’s piece? What is this otherness next to us we can’t quite see. It reaches an almost Hitchcock place of tension at one point but then returns to the almost jazzy rumination of the piano while an intense high sighing of Anderegg’s violin continues – as if to tell us the pressure is rising, that all is not well in the world next door, and may never quite be.

“What’s he building in there?” as Tom Waits might say.