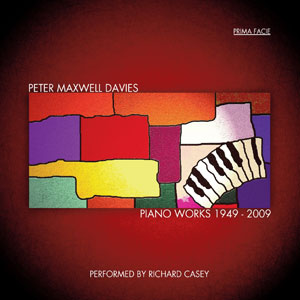 With the death of Sir Peter Maxwell Davies we lost one of our greatest musicians, and this collection of his piano works is incredibly welcome.

I’m strongly drawn to this record because Maxwell Davies’ melancholy ‘Farewell to Stromness’ is simply one of my favourite pieces of music – ever.

I first heard this lilting lament played by a young pianist during a short festival on one of the Scottish Islands – perhaps a decade or more ago. It was an encore after some Beethoven and Schoenberg, as I recall, but this short piano wonder was without doubt the exquisite finale to carry the evening home. As the late summer sunset kaleidoscoped through the stained glass windows of the venue, the resolutely island nature of this piece, its profound sense of belonging and longing & loss, hit us all deeply. It has this intensely elegiac quality.

A friend of mine, knowing how moved I had been by the experience, bought me a recording from the Max Opus site, along with some of his other works  – and when I play it I am reminded of that concert, the island, those days & my friend.

Pianist Richard Casey’s new record is particularly wonderful, because it introduces me to a whole new group of Davies’ heartbreakingly beautiful Orkney-influenced miniatures. I am incredibly fond of ‘Yesnaby Ground’, ‘An Orkney Tune’ and ‘Snow Cloud, over Lochan’ which contain the mystical wistfulness of ‘Farewell’. Similarly, the three part ‘Stevies Ferry to Hoy’ & ‘Sanday Places’. Anyone familiar with Maxwell Davies’ orchestral masterpiece ‘An Orkney Wedding with Sunrise’ will know instantly what I mean when I say these pieces are imbued with the folk rhythms of the island’s music. I am overjoyed to hear themall , to be frank. ‘3 Sanday Places’ in particular, I found moving beyond words to hear for the first time – especially the third, ‘Kettletoft Pier’. It was like discovering a long lost relative.

All of these occasionally lullaby-like creations appear simple, yes, but they actually appeal at a very deep level. I’m ashamed to admit it, but I have already created a playlist of these ‘Orkney’ pieces. The result is so sublime that I can see it working as a very successful release in its own right.

The record of course also contains what could be described as more ‘difficult’ music – and no view of Peter Maxwell Davies would be real otherwise. I was quite amazed back then when I compared ‘Farewell’ with the other pieces my friend gave me – ‘The Lighthouse’ for example. The ‘Piano Sonata’ from 1981 is a challenging seven movements which in places reminds me of Anton Webern. Similarly, perhaps more so in fact, the ‘Five Pieces for Piano’ from the 50s. Harsh, unpredictable at first, you settle into this shifting troublesome music – or at least, you think you do. I have a wonderful box set of Webern’s music and sometimes I listen to it and I think, yes, I have found a way in to this enigma. Other days he is out of reach. So it is with these pieces.

And of course, as time has passed, I have learned and understood what that young pianist knew instinctively in his selections that night – the connection between Maxwell Davies and Schoenberg, or as he might just as easily have chosen – Webern. This is particularly the case on Casey’s record in the enigmatic ‘5 Little Pieces for Piano’ from the early 60s. The fifth piece is remarkable – a slow, mysterious courting of silence and absence. Strangely, for me at least, the marvelous ‘Six Secret Songs’ seem almost a classical bridge between the extremes of his early work, and the calmness of something like ‘Farewell’. In moments I hear something like Bach, Mozart maybe, then a kind of blues. Then echoes of the beloved Orkney laments. Aptly named, these ‘Secret Songs’ are small mysteries.

As if all this wasn’t enough to make this record an essential purchase, it closes with a fascinating interview between Richard Casey, and Maxwell Davies. I was struck particularly by what he had to say about those gentle pieces of his I love so much:

“I’m very pleased that some of those little pieces, which aren’t much in themselves – let’s face it, they’re very light and very obvious if you like – but people do play them and I think that means a lot to me.”

Sadly, I never had the opportunity to meet Peter Maxwell Davies, but I would have gladly told him how much his music has meant to me in return. ‘Farewell to Stromness’, in fact, I can rarely listen to without crying. Sometimes, I even have to stop playing it altogether. Simple it might be, but it finds the core of me, as it did all those rapt concert-goers that night in the summer dusk by the sea. It is now a piece of music with such personal resonance that it’s a struggle to convey it, quite frankly.

Richard Casey’s remarkable, wonderful record places ‘Farewell’ in a full wide, brilliant context for me – and if I could only hold a note, I’d sing his praises to the rafters.